This is the first article in a two-part series on how to maximize your chances of success when approaching an investor for your business.
One of the modern marketplace myths mouthed by talking heads and politicians is that small businesses don’t have enough access to capital. You could write a book about what these people don’t know about small business.

It’s true that capitalizing a startup isn’t easy. Here’s some non-breaking news: funding a startup is supposed to be hard. But if you have a viable business model, a performance track record, can justify future performance, and are creditworthy, capital sources will come and play in your backyard. But remember the Marketplace Golden Rule: “He (or she) who has the gold, makes the rules.”

END_OF_DOCUMENT_TOKEN_TO_BE_REPLACED

Regardless of the size of the business, the ultimate responsibility for success lies with the CEO. If you’re a small business owner, that’s you. And the most critical CEO tasks that result in success or failure lie in the knowledge and practice of financial management fundamentals.

Recent statistics show that over half of small businesses fail within the first four years. Clearly, that mortality rate could be significantly reduced if, before a business opens, the founder/CEO was required to pass a course that teaches business financial fundamentals and how to operate a business with them.

Don’t worry. Your humble advocate would never presume to lump you in with those who need business finance schooling. You, no doubt, are squared away on that score, but perhaps you know a small business CEO who isn’t. And let’s say you’re keen to give that CEO – your “friend” – the maximum opportunity to avoid becoming a marketplace battleground casualty.

END_OF_DOCUMENT_TOKEN_TO_BE_REPLACED

This is the last of a three-part series covering what I call The Five Financial Mysteries. The first three Mysteries were about the relationship between cash, accounting, and profit.

In this article, I’ll complete my attempt to help you avoid becoming part of the business failure statistics. If you haven’t seen the first three Mysteries, be sure to look for the previous two articles nearby. Now, buckle up as I reveal Financial Mysteries Four and Five.

Financial Mystery Number Four
You can get squeezed between vendors and customers.

Vendors and customers are the prime entities you deal with financially every day your business is open. Understanding your relationship between these two – literally between, because your business is in the middle – is the key to cash flow management. The way to avoid getting squeezed is by managing your Accounts Receivable (A/R) Days and Accounts Payable (A/P) Days. Warning: This will get a little mathy, but not difficult IF you have current records.

END_OF_DOCUMENT_TOKEN_TO_BE_REPLACED

This is the first article in a three-part series on how to prevent your operation from joining those who are driving the increasing mortality of U.S. small businesses.

One of the pillars of the American Dream is the ability of any citizen to start a business from scratch, build it, own it and pass it along to their heirs. Research indicates that there are more than 25 million of these dreams-come-true in the U.S. Approximately eight million that have employees, the balance is independent contractors, professionals, etc., and together they create half of the U.S. economy. All of that is the good news.

The bad news is that the rate of small business mortality – when the dream turns into a nightmare – which was once 50% in five years, has now increased by 20% in the past 20 years (U.S. Small Business Administration). The reason for this unfortunate trend is associated with Blasingame’s 1st Law of Small Business: It’s easy to start a small business, but it’s not easy to grow one successfully.

The smoking gun that kills most small businesses is the Founder’s ignorance of or disregard for the financial fundamentals of business. And most of this business carnage could be avoided if every Founder understood what I call the Five Financial Mysteries. In this installment, I’ll reveal the first Mystery with the others to follow soon.

END_OF_DOCUMENT_TOKEN_TO_BE_REPLACED 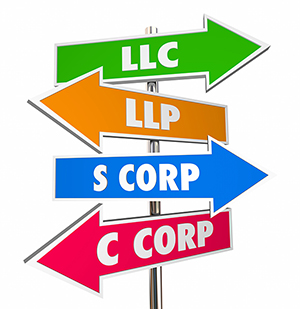 In nature, all life comes in two forms: plant and animal.

In the marketplace, all business entities are found in two forms: human and non-human. But unlike plants and animals, a human business can morph into a non-human entity.

A human business is a sole proprietorship or a partnership. Of the non-human species, there are three: C Corporation, Subchapter S Corporation (aka, Sub S, or S Corp) and the Limited Liability Company (LLC). All corporations begin as a C, and some, typically small businesses, “elect” to morph into the Sub S structure for reasons revealed in a minute. The LLC is the new kid on the block, only being available for about the past 30 years. It can be a very handy legal structure, but not for everyone.

So why should your human business morph to non-human? There are at least three excellent reasons:

END_OF_DOCUMENT_TOKEN_TO_BE_REPLACED

Two years ago in this space, April 30, 2017, I began warning about the impending tax law –nine months before it was passed – specifically how it might not be fair to small businesses. The Washington rhetoric pointed to one thing on their mind – significantly reducing the top tax rate for big business. So, when they revealed their number – 20% – I piped up that small business should get the same number.

It’s important to note here that there are essentially two kinds of business tax reporting: 1) C Corps, mostly all the large corporations, which file and pay taxes like an individual, but at their own rates; and 2) most small businesses are legally structured as S Corps and LLCs, which file a return, but – and this is important to remember – “pass through” any net profit as income on the shareholders’ personal returns. Most small businesses – millions – are “pass-throughs.”

Three months before the new law passed, in my October 1, 2017 article, my concerns proved justified as I revealed a single paragraph in the proposed law that began with the tax writers revealing that while they were holding on to the top C Corp rate of 20%, small businesses (pass-throughs) should expect the top tax rate to be no less than 25% – one-fourth higher than corporate America. And then, adding insult to injury, the second part of the paragraph revealed this smoking gun: “The committees will adopt measures to prevent the recharacterization of personal income into business income to prevent wealthy individuals from avoiding the top personal tax rate.”