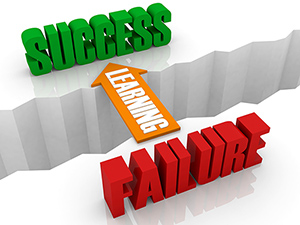 In my reading over the years, I’ve consistently been drawn to autobiographies of people who took great risks and found greater success. Of course, you can’t go wrong reading about the great intellects and leaders like Washington, Lincoln, Churchill, etc. But my favorite autobiographies have been those who are/were alive during my life because I could identify with the issues they were up against.

Contemplating why I’ve been drawn to this genre, eventually I realized it wasn’t because I was in awe of their celebrity, riches, or other success markers. It was because in every honest autobiography there is a heaping helping of examples of how that person failed. Modern failures.

Why do I love that part of their personal stories? Because they admitted they were human. They fessed up to examples of when they were bone-headed, egomaniacal, or just plain stupid. That’s why I like my good friend Barbara Weltman’s book, Smooth Failing, which is full of such stories.

One of the things I get to do in my job – now for more than 20 years – is interview accomplished people on my radio program, like the autobiographers I mentioned. Sure, I let them tell my audience about spiking the ball in the end zone of the marketplace. But I also ask about the times when they fumbled the ball away, allowing the other team to win the game. And you know what? Everyone has had more than one story to tell, and not one has ever refused to reveal their bone-head story. Not one. That kind of honest leadership is found throughout Barbara’s book.

It’s true, you learn more from failures than you do from successes. The reason, I think, is because when you succeed you’re not inclined to be introspective – obviously you won because you were so smart. When’s the party, right? But when you miss a sale, blow a deal, lose a customer, or as I have done, lock the doors one last time on a failing business, the absence of a victory party allows you time for precious introspection. In Smooth Failing, Barbara’s contributors share their relationship with this kind of introspection.

Introspection after a failure is precious because it shines a light on your investment in what Edison called, “successfully discovering what doesn’t work.” Without introspection, you could be in jeopardy of discovering my father’s farm wisdom: “There’s no education in the second kick of a mule.” In fact, the case could be made for also celebrating failure. How valuable is knowing the better path to take whether you’re calling on the next customer or reloading and reinventing your career? I know most of Barbara’s interviewees in this book, and I’m pretty sure they’ve all thrown a failure party at some point in time, even if there was only one partier.

When a successful person has limited time and can either tell you how smart they are, or how stupid they once were, take the latter. In that spirit, with all of the excellent books available to show you how to succeed, Smooth Failing will show you how human it is to come up short, and the precious future success currency that can be acquired from that experience.

Of course, no one wants to fail. But since, as a human, that isn’t one of our options, the goal should be to develop a healthy relationship with failure. You know. For when the inevitable happens, we can turn it into an investment, not an expense.

Write this on a rock … Have the courage to make failure an investment, not an expense.