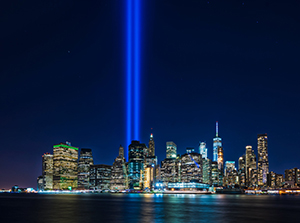 Barely five minutes after the hour, horrific images came into focus on the little TV in my office: The North Tower – the one with the prominent antenna – was smoking like a huge cigarette.

My head was filled with many questions: As a pilot who has flown abeam of Manhattan, I wanted the aviation angle. Familiar with the downtown area, I wanted the street angle. As a reporter, I just wanted answers.

Up to that moment, the event I was watching had merely changed my morning schedule. But less than 15 minutes after signing off with my audience. I joined another audience to watch the live coverage of a second plane banking hard and crashing into the South Tower of the World Trade Center. In that instant, I knew the world as we had known it had changed. Within the hour, we would learn of the crashing of two other aircraft – one into the Pentagon and one in a field in Pennsylvania – that were part of a group of terrorists’ plans for death and destruction.

It’s hard to believe that it has been 21 years since America was attacked on that beautiful Tuesday morning. In that time we have all learned many things about who and what caused the first day of infamy of the 21st Century, as well as the manifestations of the events of that day, from the horrific to the heroic.

I’ll leave the analysis to the experts, the pundits, and the politicians. But as we reflect on what is now referred to as “The events of 9-11,” I would like for us to remember two other things we have learned in full measure since then: 1) The human spirit is the most powerful force in our world; 2) It can manifest as either good or evil.

The bad news is that evil is easier to leverage than good. The reason for this inequity is because it is the nature of evil to be fanatical, aggressive and outrageous, while the nature of good is to be gentle, often complacent, and sometimes even naive.

The good news is there are many more good people in this world than evil ones. But that math only works if the good work together to fight evil.

It should now be abundantly clear: The world is still a dangerous place. Good people cannot afford to be naive. We don’t have the luxury of being complacent. We owe it to those who gave their lives to never forget the images we saw on September 11, 2001. To never forget what that evil hath wrought.

This week, as we observe another anniversary of that fateful day, let’s pledge to work together – all nations of good people – until we rid the world of intolerance and the evil of terrorism. We can claim no other comparable blessing to offset the evil of the events of September 11, 2001.

Write this on a rock … To quote Edmund Burke. “The only thing necessary for the triumph of evil is for good people to do nothing.”