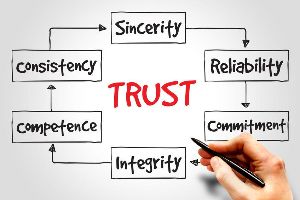 Few contemporary prophecies have stood the test of time better than this one by John Naisbitt, from his 1982 watershed book, Megatrends: “The more high-tech, the more high-touch.” I’ve named that jewel, “Naisbitt’s Razor.”

The reason for Naisbitt’s accuracy is simple: High tech, by definition, means digital. But you and I are not the least bit digital; we’re 100% analog. And our analog nature manifests as a desire to connect with – or as Naisbitt says, “touch” – other humans. So the value of touch increases proportionally with the increase in the velocity of our lives.

Digital is fast; analog is not. We may transport ourselves virtually at the speed of digital, but once there, we touch –eye, ear, hand – at the speed of analog. So how do we reconcile the fact that as high-tech consumers who desire and eagerly adopt each new generation of digital, we’re still, and will always be analog beings? One word: trust.

Nothing is more capable of accelerating with high-tech while simultaneously governing down to high-touch than trust. Naisbitt didn’t directly address the concept of trust in his book. But I interviewed him twice on my radio program and I think he wouldn’t mind if I expanded his razor to “The more high-tech we have, the more imperative trust becomes.”

In another of my favorite books, Built On Trust, by co-author and frequent guest on my radio program, Arky Ciancutti, M.D., I found this: “We are a society in search of trust. The less we find it, the more precious it becomes.” For millennia, customers did business with the same businesses because they wanted to deal with the same people. We trusted the people first and the company second. In an era where erosion of the high touch of trust is often lamented by customers and employees, there are still places where it not only exists but was actually born. Where, in contrast to the rest of the contemporary marketplace, trust is still found in abundance. Those places are almost all on Main Street in the form of small businesses.

With trust now more precious than ever, build the foundation of your small business’s culture on it. And when you can deliver on trust as your North Star, you’ve earned the right to go to market with it. Here’s an example: Reveal the combined industry tenures of your leadership team (101 years), or the average tenure of your staff (18 years). When prospects see those numbers, they hear T-R-U-S-T.

In one interview on my show, Arky said, “An organization in which people earn one another’s trust, and commands trust from customers, has an advantage.” Since contemplating that, I’ve maintained that being devoted to trust is not only the right thing to do, it’s a business best practice. Let me explain.

As the velocity of the digital marketplace increases, our business has to move faster, and our stakeholders – employees, vendors, etc. – have to keep up. As one of my vendors, if I can trust you to keep up, that’s a relevance value worth more to me than the competitive price of a low-bidder I don’t know. You just converted trust into higher margins.

In the greater marketplace, where devotion to trust is no longer ubiquitous, small businesses have been handed a rare gift. And all they have to do to claim it is create and leverage the relevance advantage Arky means when he says, “The advantage trust gives your organization is there for the taking, waiting to be harvested. It’s not even low-hanging fruit. It’s lying on the ground.”

Write this on a rock … Increase profits by adopting trust as a business best practice.