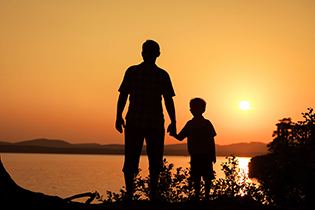 As the father of a daughter and a son, plus the grandfather of four knucklehead boys (Hurricane, Tornado, Crash, and Train Wreck), I’ve learned some things about love, especially the parental kind.

All the hours logged as Dad and Poppy have caused me to contemplate how different are the roles of mother and father in the overt demonstration of parental love. But most fascinating is how the manifestation differs between mother and father – biologically, emotionally, and experientially.

A mother’s love, at once sweet and fierce, is observed in almost all animals, not just humans. No doubt you’ve heard the simile, “As sweet as a mother’s love,” and the warning, “Never get between a momma bear and her cub.” I’ve witnessed and have been the happy recipient of this kind of love, and there truly is no other force like it in nature.

A human father’s love, on the other hand, is more often associated with unfortunate references, like “tough” and “discipline.” Here’s a warning no one has ever heard: “Just wait ’till your mother gets home!” Consequently, it’s troubling that there are no corresponding sweet references to a father’s love. Could this be why Father’s Day is not quite as big a deal as Mother’s Day? Just saying …

As a teenager, my dad once – and only once – apologized to me when he thought his demonstration of paternal love might have seemed “hard-boiled.” He was right. Now, fast forward a generation when the occasion arose for me to deliver a dose of fatherly tough love to my teenage progeny, causing the following conversations to ensue:

Father: “Because I love you.”

Father: “Sweetie, that’s a high-class problem you’ll just have to learn to live with.”

Another time, when Progeny 2 registered a similar objection to a paternal tough-love moment, that conversation was half words and half mime:

Father: “You don’t like me very much right now, do you?”

Father: Well, you not liking me because of my decision, and me knowing that and doing it anyway, is me loving you more than at any other time.”

Progeny 2: Assuming the patented teenager look of incredulity that screams: “Seriously? What does that even mean?”

Make no mistake. Mothers occupy the pinnacle of parental love – with complete justification. And not to take anything away from them, but let’s be honest: Since a mother’s sweet love is as primal as the miracle of birth, they don’t have to work too hard to deliver it – it’s their first nature. But there’s an essential uniqueness about a father’s love that deserves a better rap, for two reasons.

No one is more keenly aware of the distinction between the two applications of parental love than a single parent (especially a single mom), where both kinds are required of the same person, perhaps within minutes. Single parents should be honored on Mother’s Day and Father’s Day.

Mothers, please forgive any paternal bias you may detect, but here’s my conclusion about parental love: The only force in the universe that comes close to a mother’s sweet/fierce love is a father’s tough/courageous love. But the latter is the harder job, and the return on investment almost always takes longer.

Write this on a rock … Happy Father’s Day, Dads. You’ve earned it.