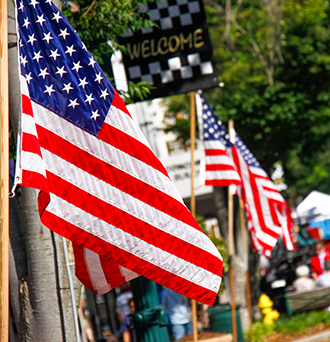 On May 5, 1868, General John A. Logan, National Commander of the Army of the Republic, was the first to make Memorial Day official. With General Order No. 11, he stated in part that, “the 30th day of May 1868 is designated for the purpose of strewing with flowers or otherwise decorating the graves of comrades who died in defense of their country.”

When America issued its first call to arms – before it was a country, before there was a standing professional army – the call went to the militia, which was identified as “all able-bodied men.” Calling themselves the “Minutemen,” because they could be ready to fight on a minute’s notice, they were primarily shopkeepers, craftsmen, farmers, etc. Today, we call them small business owners.

From as far away as Scotland, America’s Minutemen were impressive. Writing about the colonies’ quest for independence from England in his classic work The Wealth of Nations, Adam Smith predicted America would prevail thanks to its militia, which “turns from its primary citizen character into a standing army.”

Ultimately, the citizen standing army was formalized into state militias, and by the 20th Century, were re-branded as the National Guard. And in 1916, the National Defense Act created another layer of citizen-soldiers, the Reserves.

Prior to the war with Spain in 1898, latter-day Minutemen served only on American soil. But ever since, including two World Wars and four major conflicts, America has deployed its citizen-soldiers around the world alongside regular forces. Indeed, in Iraq and Afghanistan, Guard and Reserve members have accounted for one-third of U.S. forces, as well as a comparable percentage of killed and wounded in combat.

Whenever they’ve been called, small business owners and their employees have left the marketplace to demonstrate their courage – and die, if necessary – on the battlefield.

Freedom comes from God. Liberty is an ideal Americans have delivered in a promise to each other for almost two-and-a-half centuries. This weekend, we partake of the quiet enjoyment of liberty that manifests as a national holiday here in America. Amidst the picnics and other gatherings, each one conducted with the unspoken expectation of safety, we honor those who, as Lincoln so ably prayed in his Gettysburg Address, “poured out their last full measure of devotion” on behalf of a grateful nation.

Write this on a rock … Our Memorial Day heroes include thousands of America’s small business volunteers who died while standing a post in harm’s way, delivering their promise of liberty to us.